May 7th was a momentous day for Myelopathy.org, with not one but two landmark events occurring on the same day!

In the morning, Dr Kotter was proud to host the inaugural UK Academic Spine Symposium, Professor Peter Hutchinson (Professor of Neurosurgery, University of Cambridge) at the Royal Society of Medicine, London. This brought together representatives from the UK’s current spinal surgery research programmes, including the FORVAD trial, the NERVES trial and the GIRFT National Report.

And of course, Myelopathy was well represented with both Dr Mark Kotter and Dr Ben Davies outlining two of Myelopathy.org’s very own international research projects. First, Dr Davies discussed RECODE-DCM, a major consensus process which aims to establish a standard definition of DCM, determine the most pressing research questions in DCM and improve the consistency of DCM research. Secondly, Dr Mark Kotter gave an exciting update on RECEDE-Myelopathy – the first ever regenerative medicine trial for DCM.

In partnership with MediciNova, RECEDE-Myelopathy will trial the use of promising drug ibudilast for promoting spinal cord repair in myelopathy patients.

A successful result would represent a revolution in myelopathy care – the chance to not just stop deterioration of the condition, but potentially restore function.

The event was closed with a keynote lecture from one of the world’s most eminent spinal surgeons Professor Michael G Fehlings (University of Toronto) on the importance of DCM as a disease and the potential future directions of treatment and research. We are of course delighted that Professor Fehling’s has accepted the role of Chair Scientific Advisor Panel to Myelopathy.org.

Professional education will be an important part of optimising DCM care. We hope that this event was an important early stem, and we look forward to next year!

Fresh from the success of the symposium, the Myelopathy.org team rushed across London the House of Lords. Here they began to prepare for the main event: the official launch of Myelopathy.org.

While Myelopathy.org has been registered as charity since June 2018 (although the important groundwork was occurring much earlier), May 7th marked our official launch to the public and professional worlds. We had the great privilege of being hosted by the Lord Patrick and Lady Carter of Coles. Lady Julia Carter is a DCM sufferer herself, a trustee of Myelopathy.org and an inspiring champion for myelopathy suffers everywhere. She and Lord Carter welcomed clinicians, journalists, politicians and patients to one of the House’s oldest and most beautiful function rooms, complete with a stunning view of the Thames. Here they learned about the underrepresented problem of DCM and of our efforts to tackle it.

After welcome drinks, the launch evening got into full swing. Lord Carter delivered a warming introduction and we were once again honoured to hear from Professor Michael Fehlings, one of the world’s most famous spine surgeons and mentor to our very own Dr Kotter. Prof Fehlings made a riveting case for the importance of educating the public about myelopathy which captured the audience, ready for Dr Kotter to explain his own journey, from the myelopathy patient whose plight first inspired him through to the founding of Myeloapthy.org. It was then our great pleasure to welcome Dr Yuichi Iwaki, founder and president of MediciNova, who are working alongside Dr Kotter in the first ever regenerative medicine trial in DCM. It was also our singular privilege to be joined by Mr Koji Tsuruoka, Ambassador of Japan to the United Kingdom. Ambassador Tsuruoka expressed his pride in the work of MediciNova set up by a Japanese team and based in California and explained how he saw their collaboration in the RECEDE trial as a landmark initiative that combines the best of Japanese and British strengths. We at Myelopathy.org wholeheartedly agree.

Most importantly, we heard from those with the greatest stake of all in myelopathy: sufferers with myelopathy. With considerable courage, Ms Shirley Widdop described her struggle following her DCM diagnosis in 2012. Shirley explained how the discovery of Myelopathy.org and the Myelopathy Support Facebook Group had lessened her feelings of isolation as a myelopathy sufferer. Indeed, she is now a vital part of both initiatives. Mr Iwan Sadler then described his experiences of life with DCM and his fantastic efforts in founding the original Myelopathy Support group (with undue modesty!) We have no doubt that Shirley and Iwan’s moving speeches simultaneously showed the grave reality of myelopathy to our guests, but also demonstrated how a supportive community of patients and clinicians can transform the experience of suffering from DCM. We are incredibly proud to have such able ambassadors for the cause of myelopathy.

The evening continued with many stimulating conversations between members of the Myelopathy.org team and our esteemed guests. Lead by Dr Oliver Mowforth, the Student Society were out in force to represent the next generation of clinicians and scientists who will be joining the fight against myelopathy. As the launch wound down we all felt that our guests showed a heartening interest in DCM and the future challenges facing us as patients and clinicians. We are sure that the message of myelopathy will spread far and wide after the success of the launch – awareness of myelopathy has never been higher. As a charity we are thrilled to be officially up and running and cannot wait to see where the next years take us.

All of us at myelopathy.org would like to express a particular vote of thanks to Dr Michelle Starkey and Dr Gemma Wise, without whose tireless work neither the Academic Spine Symposium nor launch would have been possible 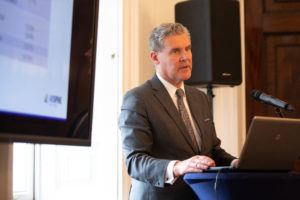 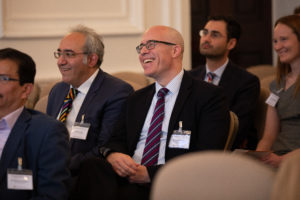 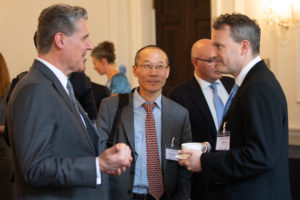