Diagnosing DCM early is challenging. This is partly because, due to current delays in diagnosis, the early diagnostic features of DCM are unknown; it is also partly because of the diversity of symptoms experienced by people with DCM [1].

Common features you should look out for include neck pain and stiffness, unilateral or bilateral limb or body pain, weakness or stiffness, unilateral or bilateral limb or body numbness, paraesthesia or sensory disturbance, loss of manual dexterity, balance and coordination, immobility, falls, and disturbance of normal bladder and bowel function [1]. Common misconceptions include the requirement for symptoms to be bilateral, or to involve the upper limb, or to include neck pain. This is not the case.

In addition, many ‘under-recognised symptoms’ are increasingly linked to DCM, such as unusual often-uncomfortable sensory symptoms [2], chest tightness [3], respiratory dysfunction [4], hypertension [5] and headaches [6]. We term these symptoms ‘under-recognised’, as their link to DCM is less well reported, but their presence should not deter your suspicion of DCM.

The most consistent feature of DCM is an increase in the number of symptoms and their persistent progression over time [1]. A careful systems review at an early stage may help detect underappreciated symptoms that help to point to a problem in the cervical spinal cord.

Remember, not all symptoms will be present and there is not a single, stereotyped presentation. Many relevant symptoms may not be recognised as related by the patient, who instead may focus on a specific feature, such as difficulty using their hand. In one series, 50% of people with DCM were initially diagnosed with carpal tunnel syndrome [7], and it is common for DCM to be mistaken for normal ageing [1].

Differential diagnoses, such as motor neurone disease, myasthenia gravis, myopathies, multiple sclerosis, tumours, vascular malformations, subacute combined degeneration of the cord, amongst many others, must be considered, but share similar investigation pathways [8].

Very much like the symptoms of DCM, any of these examination features of DCM, in any combination, may be present [1–3]. A comprehensive assessment of the upper and lower limbs is required.

Findings that you may elicit on examination of individuals with DCM include upper motor neuron signs in the upper and lower limbs: hyperreflexia, spasticity, clonus, a positive Babinski sign (upgoing plantar response), a positive Hoffman sign (flexion and adduction of the thumb after flicking the fingernail of the second digit downwards), a positive Trömner sign (flexion of the thumb and index finger on tapping the palmar side of the distal phalanx of the third digit), and Lhermitte’s sign (electric shock-like sensations going down the neck into the back and the upper limbs, especially on flexing the neck).

Although assessment of muscle weakness is one of the most frequently performed components of the neurological examination (probably because it is one of the most easily performed), muscle weakness is a difficult feature to accurately characterise [2]. The assessment of muscle strength by doctors is subjective, and often falsely reassuring. It also may not accord with the patient’s reported experience of muscle weakness, as their experience can be driven by other problems. For example, in DCM, problems such as fatigue or difficulty using the muscles may be construed as ‘weakness’ [4].

You may find sensory loss in the limbs and trunk, atrophy of the small muscles of the hand, and a broad-based, unsteady gait.

Importantly, you should remember that examination features in DCM have low sensitivity but high specificity. In other words, examination findings cannot exclude DCM, but abnormal findings are highly suggestive of DCM [1].

Specialist imaging studies have recently shown that spinal cord damage occurs before the onset of symptoms and examination findings; therefore, a high index of suspicion is very important [1].

The most useful imaging modality is magnetic resonance imaging (MRI), which allows high-quality imaging of the neurological, bony and ligamentous structures within the cervical spine (Figure 1,[2]). Hyperintensity of the spinal cord on T2-weighted images and hypointensity on T1-weighted images are associated with greater clinical impairment, but this is not a consistent finding or a diagnostic hallmark [3, 4]. Likewise, the degree of spinal cord compression has been shown to correlate poorly with disease severity, meaning that even mild compression can cause severe disease [5–10]. Because MRI is conducted in a supine position and compression can be dynamic, it is recognised that imaging without visualised compression also is still compatible with DCM [11,12].

How one accesses an MRI varies by region and country. If this cannot be arranged directly from primary care, a referral to a secondary speciality may be required. In the UK this would often be Neurology, or Musculoskeletal Services, an allied professional triage point for any concerns of the musculoskeletal system. 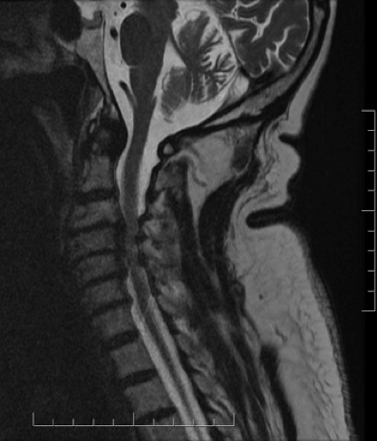 Figure 1: Sagittal T2 weighted MRI of the Cervical Spine. At C3 to C5, there is significant narrowing of the cervical canal; this can be appreciated by the loss of the ‘white’ CSF signal around the ‘grey’ spinal cord. The stenosis is driven anteriorly, by a large disc osteophyte complex, and posteriorly by thickening of the ligamentum flavum.

Clinical electrophysiological studies can be useful adjuncts to MRI imaging both in diagnosing DCM and in ruling out differential diagnoses such as isolated radiculopathy, peripheral neuropathy and motor neurone disease [1–3].

There are many different types of electrophysiological study, including electromyography (EMG), which examines the activity of the muscles, and nerve conduction studies (NCS), which examine the transmission of signals along neural pathways. Mostly these studies are performed only in the periphery, principally to assess for and localise a radiculopathy, or to rule out peripheral neuropathies, brachial plexopathy or peripheral nerve entrapment. Such an examination does not therefore diagnose DCM specifically, but can help by excluding alternative causes or informing the operative strategy [4].

More specialist versions of these tests can be performed, such as somatosensory and motor evoked potentials, which can detect the sensory and motor conduction impairment that occurs in the spinal cord in DCM [3].

There are several systems that you can use to measure the severity of DCM [1], as described in our Assessment Scales webpage.

These categories are useful to triage and inform immediate care; mild disease is generally stable, or very slowly progressive, whilst moderate to severe is more rapidly progressive for which urgent surgical treatment is recommended [2]. They also provide objective references for monitoring DCM over time. 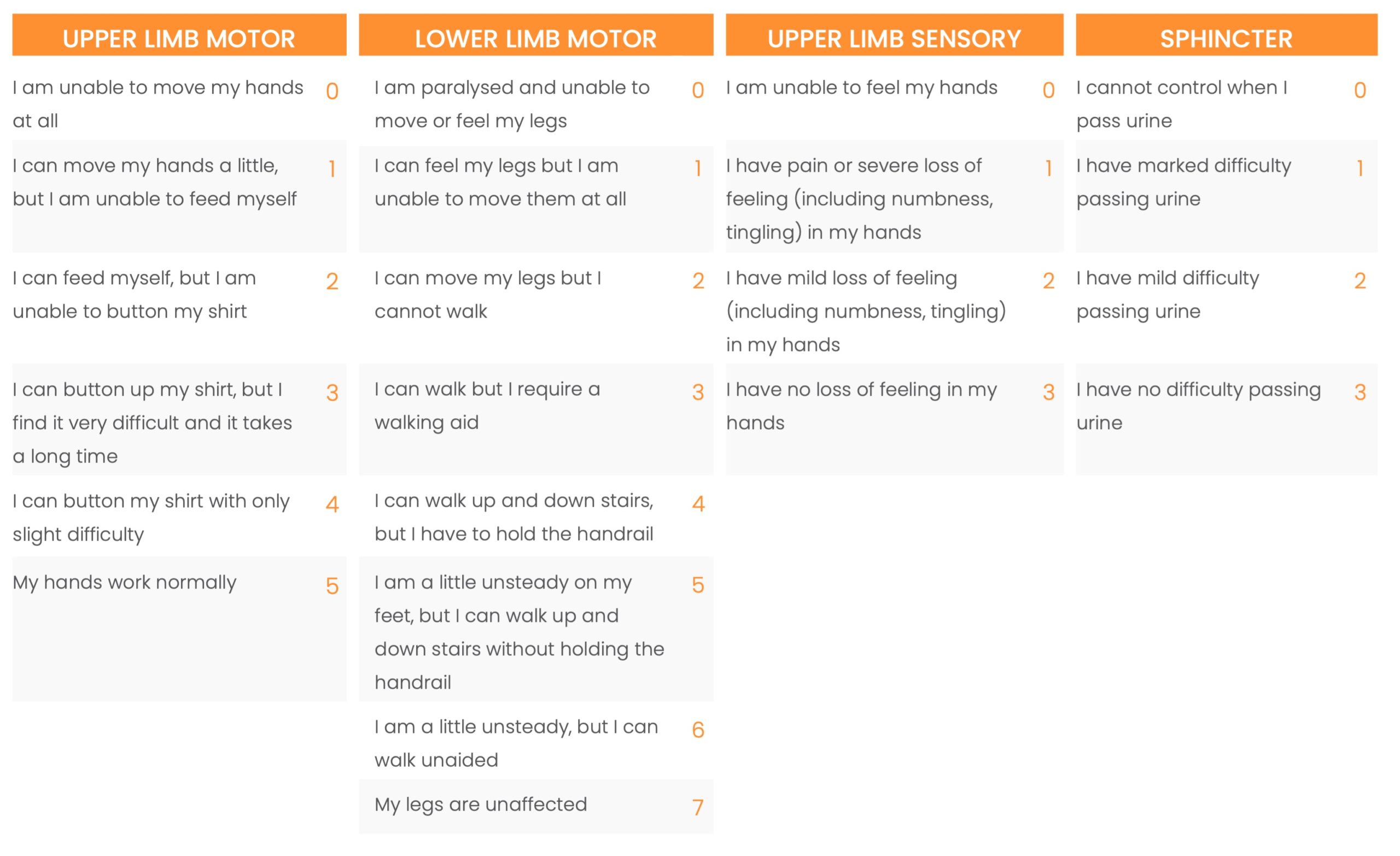